Step back in time to experience three of Nottingham’s most rebellious and bloody episodes.

Starting in Medieval times and moving through to the 19th Century, this gallery will explore key moments in the history of the Castle, Nottingham, and England. The thread running through these stories is the spirit of Rebellion; the restlessness of the majority against the corrupt but powerful few, and the desire to bring about change for the good of the people.

Through the use of large-scale AV presentations, digital interactive games, historic objects and artworks the exhibition will bring these three episodes in Nottingham’s history to life.

This book contains the diary entries of Lucy Hutchinson, wife and close confidant of John Hutchinson who was Governor of Nottingham Castle during the Civil War and one of the men who signed Charles I’s death warrant. It was written by Lucy for her children to defend their father’s legacy after his death in prison.

The journal describes the trials and dilemmas John and Lucy faced during and after the civil war, including her decision to personally treat the wounds of the injured, both Parliamentarian and Royalist alike. 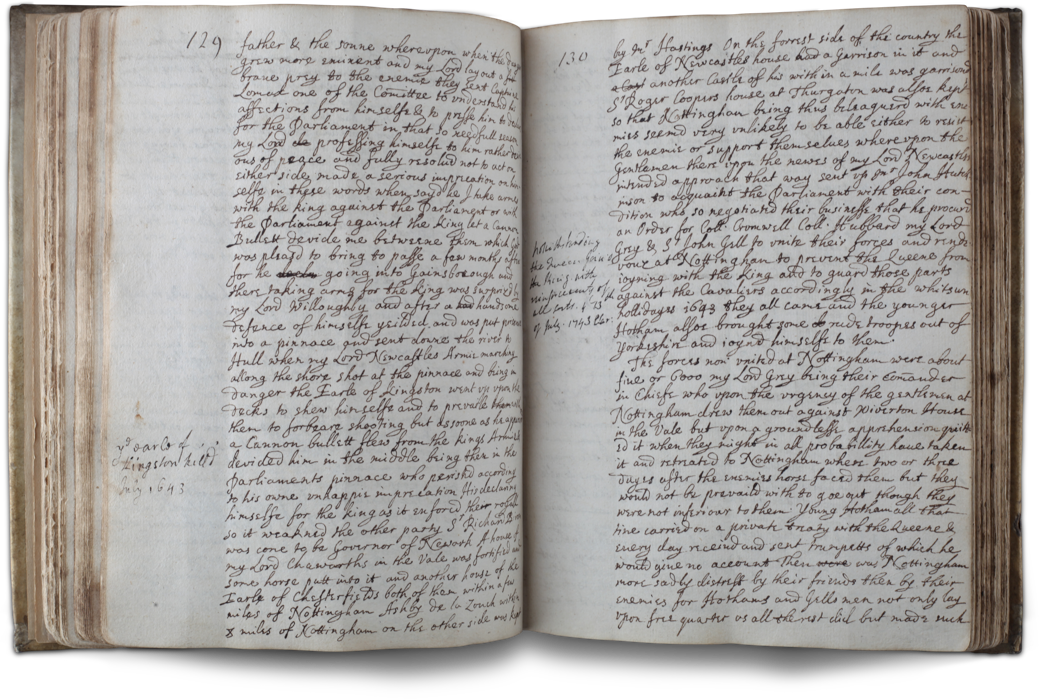 This object known as John Blackburn’s sabre, belonged to the ringleader of a gang of Nottingham men who attacked John Heathcote’s factory in Loughborough on the night of 28 June 1816. Three of the gang were arrested and one, James Towle was hanged.

After escaping from this raid unpunished, Blackburn was caught poaching at the estate of Lord Middleton and handed over to the authorities. On the promise of his freedom he turned informer, giving the names of his accomplices, resulting in six of them being hanged. Blackburn was then allowed to leave England and go to Canada.

Model of the Ducal Palace

On the 10th October 1831, a crowd of Nottingham people surged towards the Castle, furious with the residing Duke of Newcastle who had just openly declared his opposition to the Reform Act in parliament. The Reform Act, which would have given more people the vote and imposed more regulations on the electoral process, had just been rejected by the House of Lords. Breaking through the Gatehouse, rioters entered the Castle, setting it aflame and reducing it to a burnt out shell.

This model of the Ducal Palace shows the resulting fire damage.

Discover the story of Nottingham Lace

Keep up to date with the latest going on at the Castle by subscribing to our newsletter.